Being introduced to Spacewar! at MIT was like being inducted into a secret club. A friend brought you, in the evening, to a room in famed Building 20, the ramshackle "temporary" building constructed to aid MIT's World War II research. Inside the room was a refrigerator-sized computer, much much smaller than any you might have encountered. And on the glowing circular displays were two rocketships firing photon torpedos at the command of people madly flipping switches and pushing buttons. It was, according to the MIT Museum, the first video game, invented in Cambridge, 50 years ago.

At a discussion at the MIT Museum Friday, brought together under the auspices of the Singapore-MIT GAMBIT Game Lab, panel members talked about the creation of the game, how its elements are still part of modern video games, and a historic restoration of a computer like the one on which it was first played. 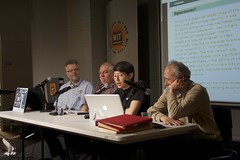 Computers, in the 1960s were multi-million dollar devices, kept in locked, air conditioned rooms, tended to by professional engineers. Using them required submitting decks of punch cards to the computer operators, and waiting to get the results from massive line printers. The PDP-1, created by the newly formed Digital Equipment Corporation, was revolutionary in that it cost only $125,000, was only the size of a refrigerator and was meant to be be touched by those using it. As a gift to MIT from DEC, one intention was to give access to students and see what their innovations created. As Martin Graetz told the group, he, Steve Russell, and Wayne Wiitanen knew they wanted to build a game, one inspired by the E.E. "Doc" Smith ""Lensman" science fiction novels.

The principles they invented for that game remain immediately recognizable to any player of video games, said Phillip Tan, Director of the GAMBIT lab. Players should play each other with the computer as the "game board". Each round of play should be different and should be at a pace that requires both skill and reaction time. The game should include realistic physics of gravity, including a sun in the middle, and propulsion. Because the PDP-1 computer didn't have sufficient computing power to include physically realistic torpedoes, they invented "photon torpedos". And the built the original game controllers from spare telephone system parts. The original background stars didn't please one of the programers, Peter Sampson, so he created a realistic astronomical display. It was dubbed the "Expensive Planetarium" because, as computers were so expensive, it was thought that building a real planetarium would be cheaper. There were no sound effects because, while the PDP-1 could produce music, it couldn't do both music and the game at the same time. The game was an immediate hit and was quickly distributed as a demonstration of what a PDP-1 computer could do. Other universities adapted it, modified it, and migrated it to newer versions of Digital Equipment Corporation computers. It was distributed - on paper tape - in a manner that today would be described as "open source". In those early days of computing, the idea of selling software - an app, or anything else - had not yet been invented. It would take Bill Gates, in the mid 1970s, to create the software industry.

For the event, GAMBIT had three students reimplement the game on a modern Arduino computer. Despite not being able to duplicate the original circular display, the game engaged young museum visitors who were even more excited when they learned that they were playing the first video game. Also speaking at the panel were Mike Cheponis and Eric Smith, two members of the Computer History Museum team that restored one of the 3 remaining PDP-1s (only 55 we ever made). According to Cheponis, the prime motivation of the restoration was to play Spacewar! on an orignal PDP-1 which now can be done, twice a month and the museum in Mountain View, CA. Those who can't travel to California can play a version in their browser here (warning, link requires Java).
Top image courtesy Computer History Museum

Wow, now this is something

Wow, now this is something that I am betting not everyone knew. I mean, who would have thought that there was some sort of war game way back then. It gives new meaning to the movie of the same name.

There are things that we just don't know about Eagle Pass and it seems that the government has been using them for strategy for at least fifty years.

Cute video. E.E. Doc Smith, still my favorite S.F. author, up there with Dick and Herbert.