ROFLCON: Memes, politics, race and gender on the Internet

ROFLCON: Memes, politics, race and gender on the Internet

The Internet descended on MIT this weekend, gathering for ROFLCon III, a conference dedicated to studying and celebrating Internet memes. But it wasn't all Nyan Cats and Double Rainbows. Conference sessions examined politics, race, and gender, and some of the most transgressive behavior on the Internet.

The 850 attendees were greeted by a keynote by Jonathan Zittrain, Professor of Law and Computer Science at Harvard, who explored inadvertent fame, memes as politics, and the power of self acceptance. Many memes involve people whose images are appropriated and used for purposes they didn't intend. Zittrain talks about "Star Wars Kid", a Canadian high school student who privately videotaped himself wielding a golf ball retriever as if it were a light saber. Found by a classmate, the tape was digitized, uploaded for the purposes of humiliation and went viral. Star Wars kid won a lawsuit against his harassers and is now attending law school.

Zittrain then focuses on the power of memes to disarm bullies and tyrants using Bill O'Reilly as an example. O'Reilly once confronted an atheist on his television programs, asserting that atheism can't explain why the tides come in and go out. This became an immediate "You can't explain that" meme. 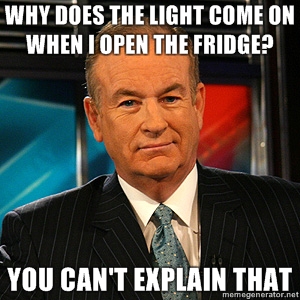 Zittrain concludes by asking whether, like St. Paul said, we should put aside childish things, or follow C.S. Lewis and put away the fear of appearing childish? It is when we accept what we truly are that we can do amazing things.

Next is a panel on global politics and memes. An Xiao Mina, a social media artis, strategist, and part of the translation team for Ai WeiWei, notes that the Chinese internet is heavily censored and that memes provide a way to communicate that censors find hard to detect and remove. One long lived Chinese meme is the Song of the Grass Mud Horse. An invented beast that looks vaguely alpaca-like, the Chinese phrase for Grass Mud Horse sounds virtually identical to the Chinese phrase for "Fuck Your Mother". The Grass Mud Horse is often found in battle with the river crab, whose Chinese translation sounds identical to "harmony", the term often used by the Chinese government to describe its Internet censorship efforts.

Before his escape to the US Embassy last week, blind Chinese dissident Chen Guangcheng had his own meme symbols, often sunglasses which he wears because of his blindness. 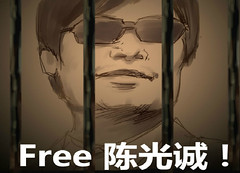 After his escape, Chinese internet users started referring to his escape and travel to the US Embassy, as The Shawshank redemption.
Even in Syria, which is torn by strife, bloggers use memes to avoid censorship and mock the regime, says Syrian blogger Anas Qtiesh When the email of Syrian president Bashar al-Assad was leaked and it was discovered that his wife's nickname for him was "duck", duck memes sprung up instantly. "Conspiracies are like germs" Assad said, and almost instantly, germ images, taken from cold medicine commercials started showing up in satirical images. 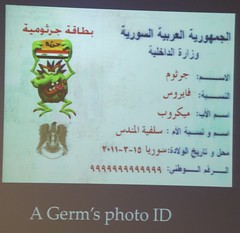 Latoya Peterson, editor of the blog Racialicious, discusses the issues of race and ethnicity of the "Shit _____s Say" series of videos. Starting with "Shit Girls Say," a whole genre of videos started, displaying perceived stereotypical reactions from the identified group. "Shit Hispanic Girls" say started a discussion about the meaning of "hispanic" as some thought that the video showed what Dominicans or Puerto Ricans say.

The meme kept going as marginalized groups took on themselves to create their own versions as did smaller subcultures. Hence, you get "Shit that Southern Gay Guys Say". Further permutations evolve, with more recent "Shit White Girls Say to Arab Girls" and a final activist "Shit Everybody Says to Rape Victims". This, Peterson says, is a way to disarm friendly prejudice, the sort of prejudice we perpetuate without necessarily being aware.

As part of a panel discussing academic study of Internet culture, Whitney Phillips of the University of Oregon talks about her work understanding troll culture. Trolls are people who post inflammatory messages in an online community for the purposes of disrupting them or provoking extreme emotional responses. Phillips is careful to say that the trolls she's studies "perform misogyny," as discerning their actual motivation is difficult. And she describes the personal struggle that comes from being a woman studying an overwhelmingly mail subculture in which rape jokes are common. Yet, as she's interviewed individual trolls via Facebook, she's been treated respectfully. She notes that transgressive behavior has a long history and that, except that there wasn't a defined subculture with which he could identify, Socrates was a troll. Or, as Christopher Poole, creator of 4chan, the web board that's ground zero of trolling, said in an interview: "People have always been assholes."

Saturday night, the crowd is entertained by Memefactory, a performance group that consists of 3 guys, 3 projectors and 5 computers. They deconstruct memes using multimedia techniques all leavened with not a little bit of humor. But they turn serious for a discussion of misogyny and rape culture on Reddit. Reddit, a popular web site that garners over a billion pageviews per month, operates with user generated content, an ability for users ("redditors") to vote content up or down, and, until recently, no site wide rules for acceptable content. Reddit's influence comes from the perception of the site as one that organizes random acts of kindness, a massive "Secret Santa" effort and, most recently, as the core force that defeated legislation they felt would harm the Internet. And, of course, Reddit is fountain of memes.

But there are portions of Reddit that revel in misogyny, that viciously mock concerns about rape culture, and that assert that men are the oppressed gender. Memefactory suggests it's time for the Internet to grow up. But their greatest scorn is reserved for Reddit itself. Since self-policing is a core Reddit value, it had no acceptable content policies until, just recently, it was forced to consider what to do about child pornography. Reddit, after long deliberation, decided to ban it, but not because it's despicably evil, but because its criminality would threaten Reddit's existence. If that's your reason for banning child pornography, says Memefactory, you're doing something wrong.

ROFLCon ends with a panel entitled "Defending the Internet", focused on the defeat of legislation that, to many in the technology community, put freedom of expression on the Internet at great risk. From panelists comments and audience questions, it's clear that there's little consensus of what defense of the Internet consists of. Towards the end of the session, "Tron Guy", Jay Maynard who has appeared at all ROFLCons as well as many other venues dressed as a character from the movie Tron, stands up. He tells the audience that he hopes he's stored up a lot of capital with this group because he's about to say something for which he expects to lose a lot of friends. "I'm a Tea Party Patriot," the 52 year old computer engineer says, coming out of the closet as a conservative in a room he expects largely thinks otherwise. He exhorts the audience to leave the leftist rhetoric behind because what's being talked about is freedom and it's too important for all of us not to be working together. He gets a prolonged ovation. Afterwards, Maynard is astonished by the number of people who come up to him and thank him for speaking up. Why is he surprised, he's asked. You're one of us, he's told, and if we can't embrace diversity within our own ranks, we'd be hypocrites.